I just might have a new favorite! Check out Wilma. Poor girl has been run over goodness knows how many times and flattened beyond recognition, and to add insult to injury, the rain has pulverized her! She's a soggy weathered hot mess! And what is that green glop oozing from her? I do believe Wilma's runway days are over. 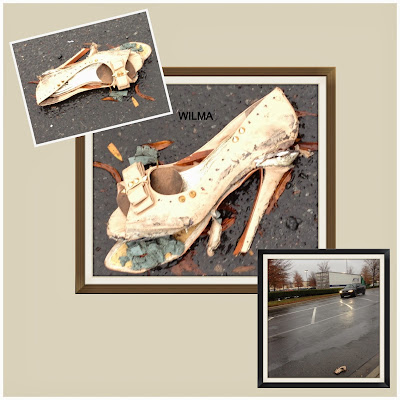 Posted by Unknown at Thursday, December 26, 2013 No comments:

No matter how many lone shoes I come across, I am always amazed with when and where I find one by itself. Driving home from brunch on Sunday, I spotted a Nike sport flip flop in the grass just off the side of the road. First off, how does a flip flop find itself alone in the dead of winter? It would make a bit more sense if it were summer, but the temperature outside, according to my car's thermometer that day, read 40 degrees. So who's wearing flip flops in this colder weather, and how did the flop end up flying solo in the first place? Also, on the other side of the grass and waist high shrubbery, sits a swanky resort, reaffirming for me that shoes go missing in all walks of terrain. Finding lost soles never gets old! 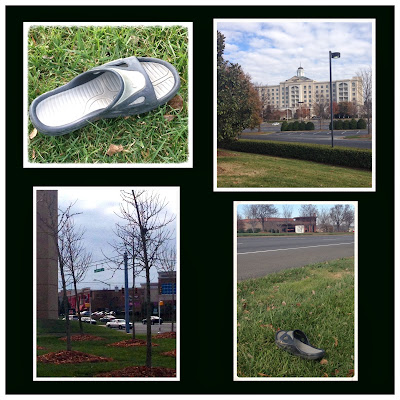 Posted by Unknown at Saturday, December 07, 2013 No comments:

One afternoon I went to over to my sister's house for a visit. As I exited off 485 and merged onto Idlewild Road, I spotted a small brown shoe in the middle turn lane of the busy 4 lane road. I knew instantly it was child's shoe because of its size. Of course, I pulled over and snapped some pictures. He's one of the shoes that I included in my last post "Fall Finds", but I felt he was worth mentioning again.
Since the initial spotting of the shoe, I have been to see my sister 4 more times. It's been 6 weeks and the little guy is still there sitting in the same spot. Now, every time I take the exit and make my way toward my sister's house, I look for him.

How long will he last? Will he make it through the winter?
I'll be curious to see! 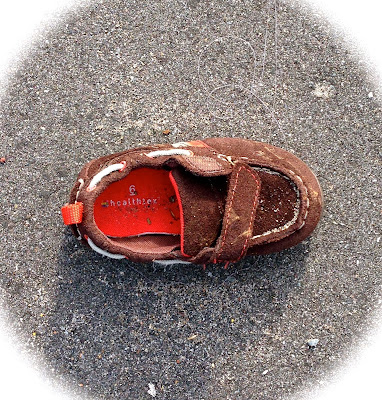 Posted by Unknown at Saturday, November 30, 2013 No comments:

Crisp cool temperatures have replaced the heat, spectacularly colored leaves adorn the trees and pepper the streets, and the smell of burning wood permeates the air. This time of year brings about much change, but one thing remains the same: lone shoes still pop up all over. I just wanted to share some of my most recent 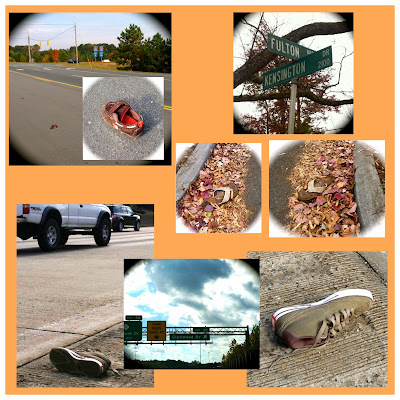 Posted by Unknown at Thursday, November 21, 2013 No comments:

I like to give names to the shoes I come across. Meet Howard, a boat shoe. Of all my finds, this sole is my absolute favorite. Howard has come to rest in the median of a busy intersection. How long has he been there? I bet it's been quite some time because poor Howard is deeply weathered and old. He looks as though he's growing into the concrete and I can't tell where the median begins and where Howard ends. Are those weeds I see growing in and around him? How has Howard been there for so long seeing as thousands of cars pass by on a weekly basis?
What's Howard's story, I wonder? 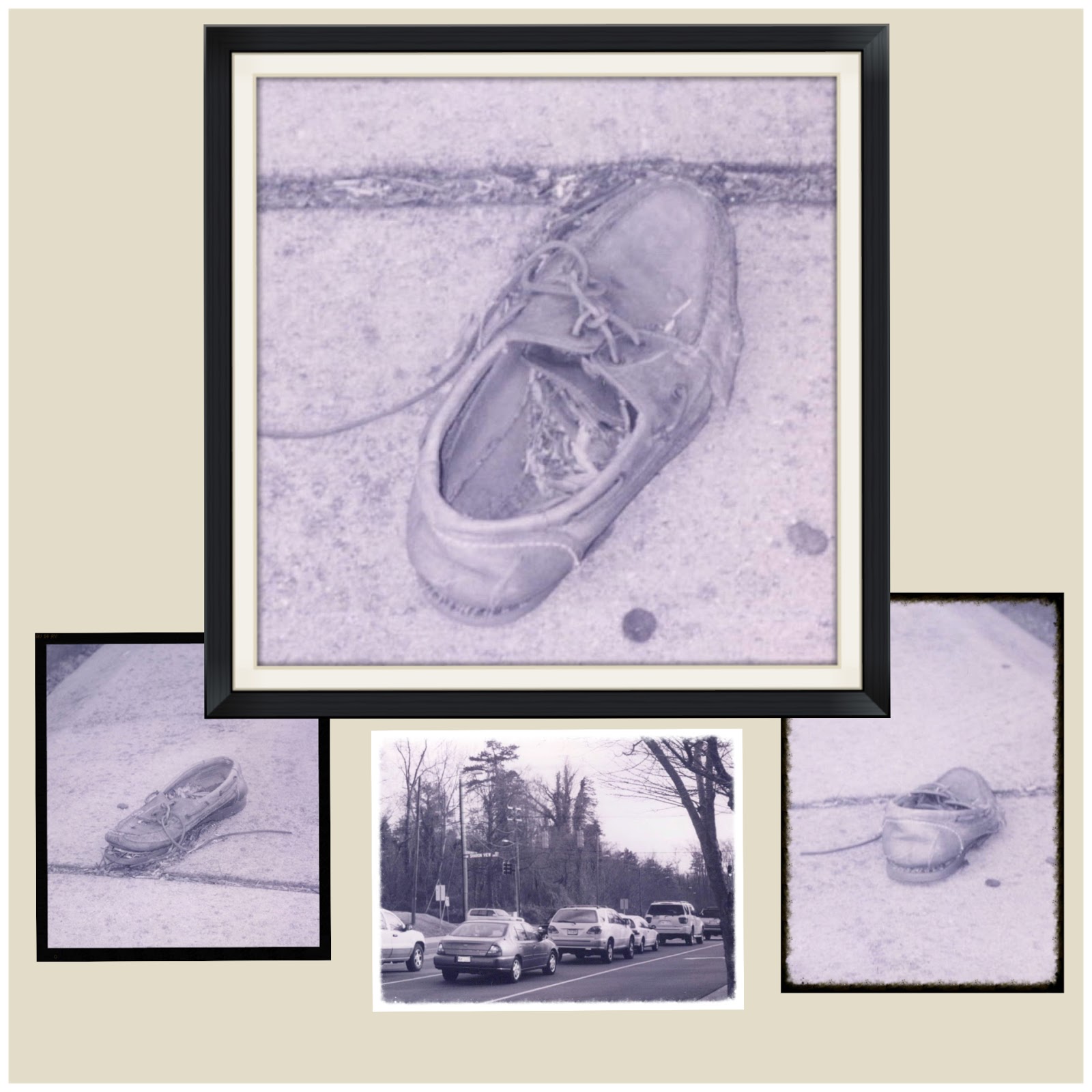 So I've been wondering about the stories behind these lost soles that I encounter. What are their tales of separation from their sole mate? I first reflect on when I might have ever lost a shoe and I come up with one scenario and then another. What about the time I was in a hurry to pack up after a vacation and left a single sandal behind in a hotel room. Or what about the time I grabbed my gym bag but didn't realize I had left a sneaker under the bench. Maybe this whole losing the one shoe thing is not so uncommon as I had first suspected. Then I think of all the absolutely strange places that I have come across lone soles. Highways, medians, sidewalks and even in the middle of intersections---how did they wind up there? I can't come to any rational explanations or draw any reasonable conclusions, so here's where creativity and imagination come into play. I'll be their voice and give story to their sad separation from a beloved other half. I'll tell of their misfortunes, fiascos, brushes with danger, and close calls. Who shall I begin with--
Stiletto, Flip Flop, Boot, Cleat, or perhaps Mary Jane?
Posted by Unknown at Sunday, October 27, 2013 No comments:


For every shoe I spot and then capture on film, there is one that I find but for various reasons and circumstances I just can't get the shot. Sometimes I am a passenger and not in charge of driving; therefore, I can't make the decision to turn around or pull over. Other times I am on the way to an appointment or perhaps already late and therefore unable to stop. And then there are the times when the shoe is in a dangerous location or an impossible location in order to capture the picture. I can't tell you how many times I see a shoe on a highway and there’s nowhere for me to pull over and surely no room for me to take a picture without getting hit by a car. I cannot and will not endanger my life or the life of someone else.
Just recently, while traveling home from Charleston, SC, I noticed a sneaker turned upside down on the side of the highway. The shoe was smack dab next to the concrete divide as I merged from I26 onto I77. There was no exit for another mile and no pull off area on the left. And if I pulled over on the right, I would have had to run across 3 lanes of traffic with nowhere to stand. There was literally a foot of asphalt space between the yellow line and the divide--an impossible location. I very much dislike when I spot a shoe and can't get to it, but I have to be safe. Oh, don't get me wrong, sometimes I estimate intersection light changes and make a run for it, or hang over a curb when traffic lets up, but I make sure that it's safe first. I know that there will be plenty of other soles soon; I just have to be patient.
Posted by Unknown at Thursday, October 10, 2013 No comments:

In Search of Soles 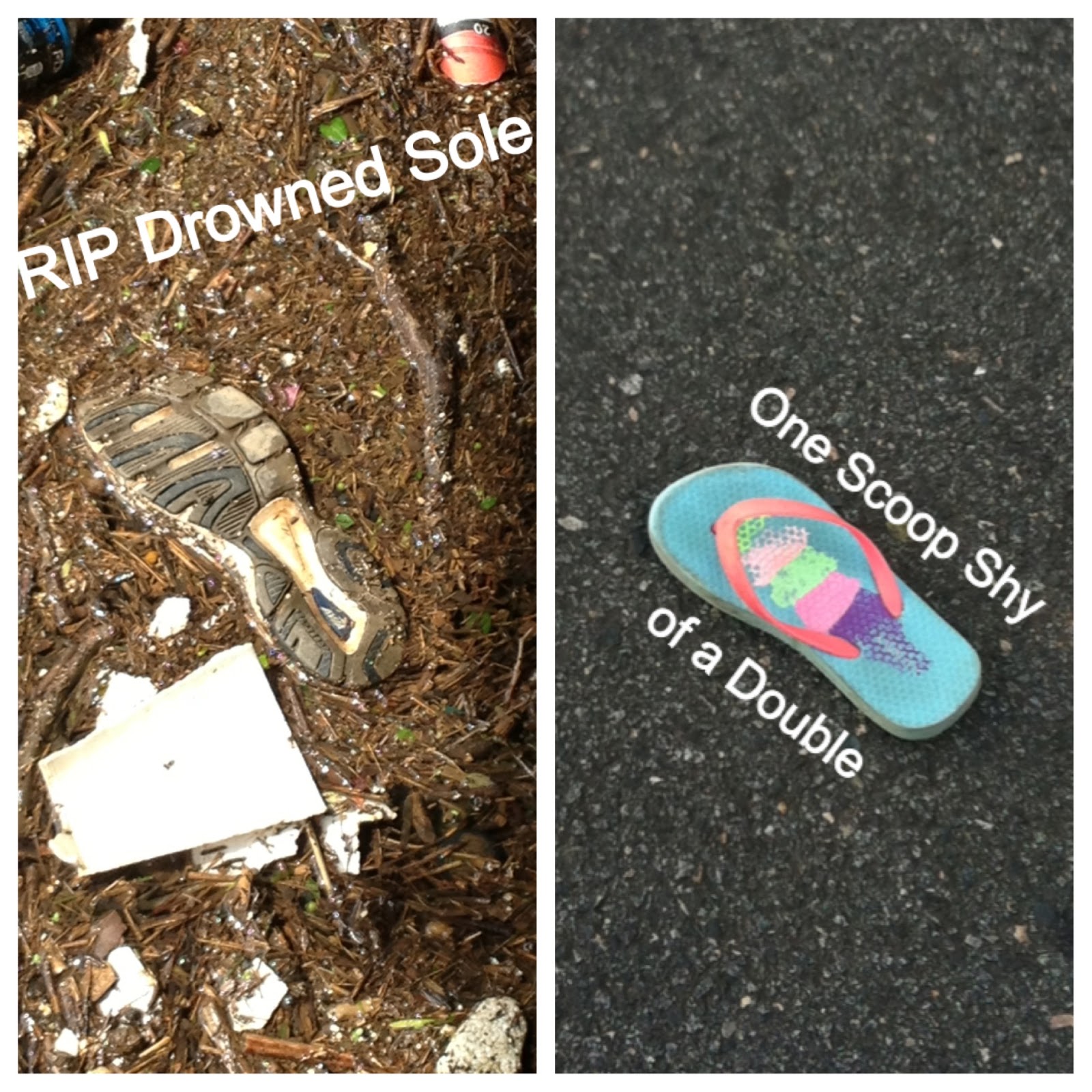 So I have begun to enlist the help of my friends and family with the search for lost soles. I've asked them to keep their eyes peeled and to be on the lookout wherever they go. Whenever a sole is spotted, I ask for both a picture and a location. Having both helps trigger where and when they were discovered.  I'm happy to report that shoes are showing themselves to my loved ones. Just last week I received a text from my brother that read, "A lost sole drowned in the Tennessee River in Knoxville."  He was on a hike and saw a capsized sneaker immersed in mud and surrounded by trash and debris.

That same day, only a few hours later, a friend in Matthews, NC, came across a child's flip flop in a parking lot as she walked to her car. She snapped the shot and shared the location. Her 2nd text read, "I walked by it and turned around to take a picture...Some lady watched me take the pic and must have thought I was crazy." I can relate. There are many times I wonder what people are thinking as I crouch by the side of the road or run into an intersection with my camera. It's all for the shot!!! And I'm grateful that those I love are helping in the search! Many thanks!

LACING UP FOR THE RIDE

I've always noticed lone shoes on the side of the road--they would be in the median, on the sidewalk, along the highway, and other random places. And only one- I always wondered why they were flying solo, and why they were missing their other half. How had they come to be alone? When I'd seen enough of them, I started carrying around a disposable camera (long before the iPhone) taking shots of them from different angles. And when I take the pictures I never so much as lay a finger on them because I want to snap the shots as is, as they were left or discarded. I then take a picture of the location, a street sign or something that helps define the area and a beginning of a collection of forgotten journeys began.

It's been about ten years now. The first time I pulled over, I felt like a freak as I frantically veered off or pulled U-turns in the the middle of traffic. Exit. Highway. Neighborhood. It didn't matter. I found myself running into the medians or in front of houses, constantly wondering what people thought of me as I stood, hunched over and taking my pictures. But I was fascinated and the more pictures I took, the more shoes appeared. I'm guessing it's simply just a newfound awareness. But as I suddenly found one,  I suddenly found them everywhere. I've found soles in many of the places that I lived or traveled--everywhere from Dallas and Fort Worth, Texas; Charlotte, North Carolina, Charleston, South Carolina; Las Vegas, Nevada; I even found one in San Francisco while vacationing with a group of students on a field trip, though they paid my absurdity no mind as I ran in the middle of the road to capture a lone sneaker. They waved it off as another eccentric tendency of their middle school English teacher.

I had no idea what I wanted to do with this new inclination; I just felt an propensity to collect these lost soles in some form to pay homage to their existence. But I do wonder sometimes if I am the only person who does this. But every time I've mentioned it to someone, they'll say, "No, I've never noticed them before" or give me the, "Oh, yeah, like the two shoes hanging over the telephone wire?" No, that's not what this is about. I'm talking about a single shoe on the side of the road. Surely, I can’t be the only one that notices them? Regardless, these lost and forgotten soles have a story. Where is their other half? Why were they discarded? How did they come to be lost or forgotten and in such strange places? Am I like one of these lost soles in my fascination with them---that remains to be seen. Either way, I'm defining my own story as I tell theirs.

Posted by Unknown at Wednesday, September 11, 2013 No comments:

Promote Your Page Too 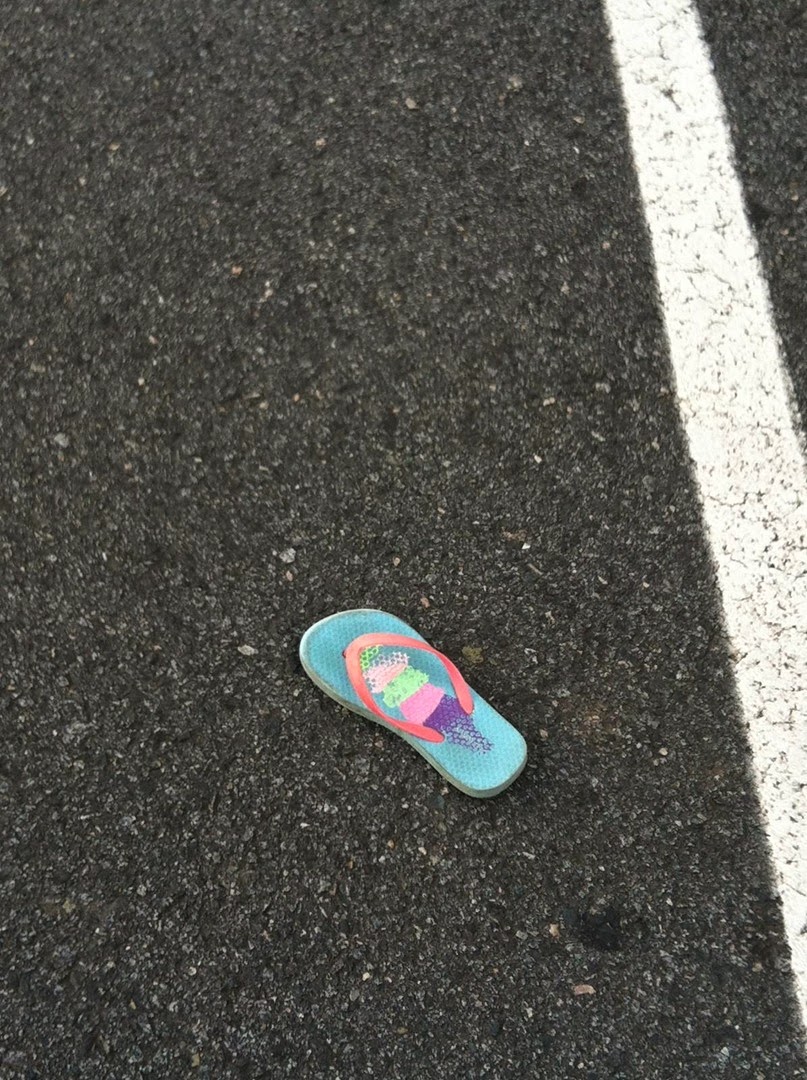